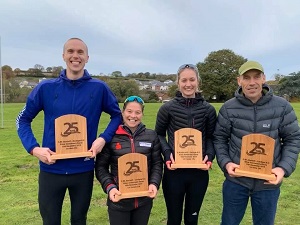 At the Bexhill Poppy Runs on Saturday 9 November 2019, over 300 runners took part in the 10k event, with Sarn Helen Running Club’s Graham Penn (M65) donning conventional kit, having run the Half Marathon in full World War One uniform for the past five years! The weather was superb, with Graham achieving a time of 59:46.

On a bright, sunny Sunday 10th November, after the crowds and horses from the Remembrance Sunday service and parade had melted away, Cardigan Running Club held its Silver Anniversary races, 10k and 25k. With a chill in the air, runners headed out uphill to the A487, along for a short distance and then turned off to smaller and quieter roads. Supporters and cheerful marshals were out in force, directing runners and providing encouragement. The 10k course was followed by three runners from Sarn Helen Running club, with an undulating route and some steep climbs for the first half, and sweeping bends and downhills for the second half, providing views down to the estuary towards Poppit Sands, before finishing back by the start line at the school field where commemorative slater coasters and cake greeted finishers. Glyn Price powered home to first overall, with a time of 38:57, Steffan Thomas, third overall, arrived in a time of 40:50 and Rebecca Doswell finished with a time of 1:12:09.

On Saturday 16th November 2019, 33 runners took to the Beacons Way for the Llyn y Fan Fell Race, an 8.8 km route with 610m (2000ft) elevation. Runners ascended the slopes of Bannau Sir Gaer, before continuing across the top of the escarpment over Picws Du, and up to Fan Foel. Sarn Helen Running Club was represented by Nigel Davies (MO40), who achieved a time of 1:11:46, with Glyn Price (MO50) recording a time of 1:15:58.

Over the border, as part of the Welsh ladies team at the British and Irish Masters International Cross Country, held at Aintree Racecourse on 16th November, Dawn Kenwright recorded a time of 00:29:36 in a 6k run in the W35-W60 category.

Sospan Road Runners Pembrey MT10 took place on 17 November 2019, on an undulating multi-terrain course in Pembrey Country Park and forest, including trail and beach. Sarn Helen’s Kenneth Caulkett achieved 6th overall, and 3rd in his category with a time of 01:03:54. Carwyn Davies recorded a time of 01:10:36, 10th in category, with Jenny Caulkett achieving a time of 01:44:39.

Finally, congratulations to Glyn Price, who was awarded third place in the M50 category by the Welsh Athletics Association following the Welsh Masters Marathon Championships, hosted by the Snowdonia Marathon in October.