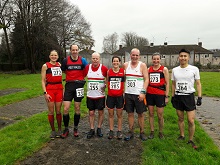 With severe weather having made such an impact onFebruary’s race calendarthe Coastal Path Half Marathon that runs from St Davids, and even includes the 39 stone steps up to the famous Cathedral, was long awaited by the Sarn Helen gang and was later described as ‘the muddiest run I have ever done’ by 4th place finisher Simon Hall (1:33:09). Having pushed past Hall on the final uphill mile into the city centre Dan Hopper placed an impressive 3rd overall (1:32:36) with Mark Rivers achieving a near 4-minute PB (1:42:07) and placing 3rd M40. Our only lady on the race trails, Eleri Rivers, did the club proud as she placed 7th female overall (1:57:51) and narrowly missed out on the podium as 4th F40.

Held from the Leisure Centre in Abergavenny the Sugar Loaf Fell race this year also encompassed the Welsh Athletics Inter-Regional Fell running Championships and West Wales, which include the 3 for mentioned Sarn Helen Members, really made their mark. A challenging first half sees the runners climbing peaks and troughs to the highest point of the mountain range before a furiously fast, sometimes steeply technical 3-mile downhill finish. In a time of 1:04:13 Dee Jolly was first home of all the inter-regional lady competitors and along with Aberystwyth AC’s Helen Marshall and Louise Barker clinched the Welsh Athletic’s Gold for West Wales as well as placing 3rd lady overall in the individual classes.  Carwyn Davies ran a time of 1:10:14 and unfortunately did some damage to his achilles. Mitchell Readwin, experiencing a grade A fell race for the first time, ran 1:18:29 and along with Neath’s Alex Lewis and Aberystwyth AC’s Michael Lai the men’s team took home Bronze.

A firm believer in racing his way to fitness and a man who is likely to find an event wherever he roams, Sarn Helen’s David Thomas completed his 2nd London based half marathon in two weeks. Taking part on April the 8th in the famous English Capital Park, Thomas ran the Regents Park Half Marathon in Westminster. Being a route that the veteran or would favour as it consisted of 5 laps along mud free tarmac paths Thomas ran an improving time of 1:48:36 and placed 9th in a large Veteran field.

The same day the annual Fishguard Sea Cadets 10k was held by the renowned Onlineraceresults.Org husband and wife team and supported by the Sea Cadets themselves. This year boasted a fair field of 71 runners, some beautiful conditions and great times by our Sarn Helen runners; sped on by their anxiety to return for cakes and refreshments at the Ocean Lab Café. Kenneth Caulkett finished 3rd overall in a spectacular time of 35:59. Dawn Kenwright took home gold in the F55 class in 47:48 and Jenny Cauklett placed 4th in the F35 category in 56:05.

Saturday April 21st saw two of Sarn Helen’s lady runners at Coed y Brenin near Dolgellau for the Gold Rush Trail Race, 8 and ½ miles through the forestry and hills. Dawn Kenwright and Pamela Carter braved the heat at this trail race for runners and canicross competitors (runners with dogs). Although it was hot and dry, there were still muddy sections on the course, which has the reputation of being one of the most challenging of the Coed y Brenin events. Dawn repeated her achievement of previous years in finishing 1st Female over 60 in a time of 1 hour, 31 minutes and Pamela recorded a brilliant 1 hour 37 minutes, surely a sign of great performances still to come.

Sunday 22nd turned into a fine afternoon for those present at the annual Ras Crannog which is held from and organised by the team the Urdd Centre in Llangrannog. The event held races and gave medals for all ages with Sarn Helen’s future juniorsperforming well in the Years 1 and 2 race. Steffan Rives and Christopher Readwin took part in the Year’s 3 and 4 event where they battled to the very end. Harri Rivers placed first overall in the Year 5 and 6 race as did Daniel Morgans in the secondary school event.

In the adults course, which had to be remapped and remeasured due to land slide conditions on the technical coastal paths, the club continued to place well with a fantastic One, Two, Three in the overall positions. Simon Hall pushed had through mile three to four and made enough of a gap to place 1st with Mark Rivers running across the line 2nd and winning the Male Veteran class while youngster Tomos Morgans placed 3rd. Mitchell Readwin raced hard and won himself 3rd Open Male while Dee Jolly placed 1st female after a fraught fight with Aberystwyth AC’s Enid Gruffudd who placed 2nd. Delyth Crimes’ last-minute decision to race turned out to be a good one as she walked away as 1st Vet lady.