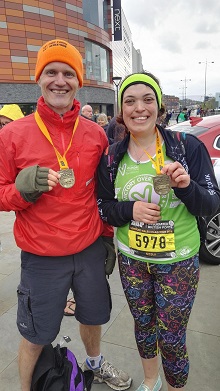 One week later and the winds had cooled, the skies had dulled and the weather was, to be put simply, perfect for running. One week later, April 29th, also dawned the inaugural ABP Newport Wales Marathon and with 5 Sarn Helen on the start line it was a pleasant day of excitement and apprehension. A storming performance from Caryl Wyn Davies came as no surprise seeing that 2018 so far has been full of PB’s and promise. This was the young athletes 8th marathon to date and her experience along with her dedication made for a very special day. Her outstanding time of 3:13:15 was the fastest pace a female Sarn runner has achieved for some time and placed her 6th lady overall, 4th in the Open Lady class.

The flat course and perfect weather made for great times all round for the Sarn Helen gang. Running in aid of Victory Over Cancer/ Velindre Fundraising, a foundation based on supporting those going through treatment as well as funding research, was Nicola Davies. The delayed start time of the event, due to traffic, did nothing to settle Davies’ nerves but during the second half her determination shone through and she finished in 5:26:45. Marathon man David Thomas has completed over 50 26.2mile races under uncountable conditions and terrains. Identifying this as potentially a PB course he enjoyed the race and finished in 3:58:53.

As a tribute to his wife and her astonishing strength, both inner and physical, Steven Holmes ran after very little in the way of mileage preparation. A show of his general fitness and the importance of cross training however saw him achieve a fantastic time of 3:34:25. Husband and wives combined efforts have seen over £20,000 raised for their chosen charity, The Roy Castle Lung Castle Foundation; chosen due to Janes 2014 diagnosis. She has just completed her second round of intense treatment and celebrated by taking part in a challenging multi-terrain 21walk from Aberaeron to Lampeter!

With his training effected by the disruption and sleepless nights associated with lambing Jack Cockburn, a newer member to the growing crowds of Sarn Helen Running Club, finished in a fantastic time of 3:20:28, and at his first ever marathon! Cockburn is now looking for his next challenge with 2018 looking to be a good one for the athlete.