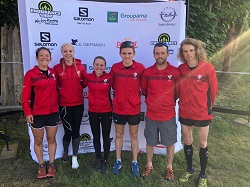 An outstanding performance by Sarn Helen’s Jessica Bruce at Ras Y Barcud Coch put her on top of the ladys race and also gained her an invite to the prestigious Trail Running Championships in France where she proudly represented both club and country. She placed 1st lady with a time of 2:00:45 on Saturday 5th of May in the gruellingly hard half marathon organised by Dic Evans and held over the mountains surrounding Devils Bridge, resulting in her completing an equally tough 26k trail race in Brittany on Saturday 19th May; this time in the royal red Welsh colours.

Also performing well in the Ras Y Barcud Coch half marathon was Dylan Lewis who ran despite a cold and placed 2nd M35 in 1:39:23. Two other Sarn Woman showed their strength and stamina with Dawn Kenwright winning the F60 class in 2:31:39 and Pamela Carter running 2:50:34. Although a slighty smaller sister race, Ras y Diofal 10k is no less tough and our only representative did great. Andrew Poole, with a growing liking for the off road and trails, placed 2nd overall in 53:58.

St.Illtyds 50k ultra marathon took place on the 6th May. Ken Caulkett was 1st overall in 4.58 and Jenny Caulkett finishing her 1st ultra in 7.54. The course starts from Burry Port Yacht club, following the St.Illyds trail, through forestry, fields and roads, before returning to the start. It is a hard and hilly course with nearly 4000 foot of ascent, made harder with very hot weather. A beautiful course organised by Nathan Flear (GB Ultra runner) and his partner, Tori- this is the 2nd time this event had been run and it attracted over 170 runners. Fantastically organised with plentiful food stations, this is a must for any runner wishing to challenge themselves.
First Lady also went to a local female as Amman Valley’s Clara Davies placed a fantastic 4th overall in 5 hours 37.

A sunny bank holiday, May the 7th, saw the annual Carmarthen Mayors 5k race take place and to change it up a bit the route was run backwards. One Sarn Helen member was on the busy start line and finished it a great position, 12th on his class. Despite the heat Graham Penn ran a full 7 minutes faster that last year and finished in 30:25.

A sight like no other on Saturday May 12th... The majestic Preseli mountains on a warm and calm Saturday morning covered with an unlikely group of nearly 300 runners taking on a combination of three off road races. Sarn Helen was superbly well represented in the Preseli Beast Bach, an 11mile challenge that tops Carn Ingly and climbs the indescribable ‘Devils back’. A very last minute entry for Dylan Lewis meant that Sarn Helen have won the race every year since the inaugural event as he lead by a clear 4 minutes with a time of 1:18:33. The historical battle between team mates Simon Hall and Glyn price continues and in this issue it was Hall with the upper hand. He placed 4th overall and 3rd Open Male in 1:24:22 with Price a smidgen behind placing 5th overall and winning the M50 class in 1:24:33. Not quite a PB and positioning the same as last year Sarn Helen’s only lady present, Dee Jolly, placed 2nd overall, 1st Open female in 1:33:40. Mark Rivers added another prize to his growing collection as he placed 2nd M40 in 1:34:33 while Mitchell Readwin ran a fantastic PB in some hot and hard conditions finishing in 1:48:17. David Thomas, a virgin to the event, was unsure what to expect and unsure if he enjoyed! He did however run a respectable time of 1:56:20.

Saturday May 19th was The Royal Welsh Trail Festival, a relatively new event but has quickly grown to be one of the UK’s largest trail running events. It’s held at the showground in Builth Wells and is incorporated into the Royal Welsh Spring Festival, so makes for a great day out for the whole family. Like 2017, this year was again a very hot day with little breeze, which makes this tough route even tougher. There are two main races that take place as part of the festival, the half marathon and the 10k. There was also 3k, family fun run and a toddler dash too.Sarn Helen’s George Eadon laid down a solid performance in the hilly 10k race, crossing the line in 47:44, 13th o/a and 8th open male. Gareth Payne and Andrew Poole both had a great race in the half marathon, which consisted of two gruelling laps of the 10k route. Gareth finished 1st M45-49, 10th o/a in a time of 1:27:54 and Andrew finished 4th M35-39, 13th o/a in a time of 1:32:34.

Sunday saw three Sarn Helen members travel to the north to take part in the Snowdonia Half Marathon which starts and finishes in Llanrwst. This is a tough, hilly route, some road, some trail and climbs some 2000ft. This race has two medals up for grabs, one for completing the race and an additional medal for those who manage to run the entire 1:7 climb at mile 11, which with all the will in the world, none of our runners managed it. George Eadon is obviously a sucker for punishment was racing again for the second day in a row and completed the route in a respectable time of 1:49:17, Martin Darby and Matthew Walker finished together with the time of 2:19:48.

A favourite amongst the hardened Triathlon athletes, the Pedalclover Slateman Triathlon, held on Sunday 19th May near Llanberis, is always well attended and never gets any easier. With Ironman training in full swig Kevin Hughes made the 2-and-a-half-hour journey to test his training and prep and apart from the freeze of the quarry lake, came home happy. He placed well in all three disciplines but it was in the run that he pulled back some positions and his overall time of 3 hours 1 minute placed him a fantastic 95th overall.

The same day and not too far away Dylan Lewis was building on his already strong reputation as he took part in the highly competitive and targeted race, Ras Y Gader Mountain Race. Commonly known as Cader Idris Fell Race this year bought record numbers; record sell out time, record number of entries and record high temperatures. Although the extreme heat was undoubtedly reflected in people’s times the race was still strong and competitive. On the finish line Lewis placed a fantastic 6th overall in a time of 1:34:11.