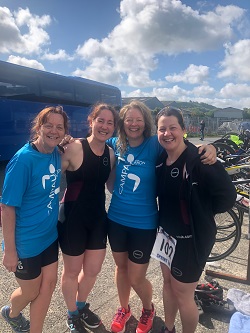 On the misty morning of Sunday the 13th of May, 6 Sarn Helen members collected at Lampeter swimming pool to start the 3rd Campau Caron Triathlon. This year’s Triathlon was different to previous years with the competitors starting in Lampeter and finishing in Tregaron. The 400meter swim was in Lampeter Swimming pool, on finishing their swim the 31 competitors took to their bikes and cycled the 12miles to Tregaron, through the villages of Cellan, Llanfair and Llanddewi Brefi before reaching Tregaron Leisure centre and into the 2nd transition.

The mist lifted, leaving a bright and sunny day for the cycle up to Tregaron. In Tregaron, the competitors were met with support from Sarn Helen members cheering them on as they disembarked their bikes and set off for the final section of the triathlon the 2.5mile run. The run was an out and back course, running from the leisure centre on the Aberystwyth Road to TTS and back in. The out and back route provided more support from other competitors who cheered each other on in the final part of the race.

Out of the field of 31 competitors Sarn Helen members obtained some excellent positions.

As for the male competitors they completed the triathlon in relatively close succession with Dorian Rees finishing in 1hour 1minute and 50seconds and his brother Eric finishing under the hour in 58mintues and 2seconds and gaining a position of 2nd in category and 3rd overall. Kevin Hughes finished closely behind Eric gaining 3rd in category in 58minues and 33seconds. With Aled Morgans competed in the triathlon for the 2nd consecutive year, finishing in 1hour 2minutes and 11 seconds.

The men of the Rees family are taking their Ironman training exceptionally seriously and their visit across the border on June 3rd to take part in the Diva Middle Distance Triathlon, Chester, proves their well on their way to success. The popular event which is in its 20th year, was held from Grosvener Park and takes in lots of the city sights, the Old Dee Bridge and on the bike leg even crosses the athletes back into wales; A Tri of two countries.
The results were closes and the boys rankings were impressive in such large crowds. Eric Rees’ total time of 5:27 placed him 32st in his category and showed his strength on the run whilst he was near equal on the bike leg to younger brother Dorian; meanwhile Dorian’s total time of 5:44 paced him 31st on his class with his swim showing great potential.