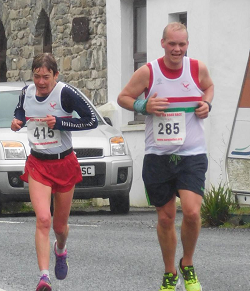 Ras Y Hafod, an annual event held around the majestically grounds of Hafod estate, was well attended by Sarn Helen Running club on Wednesday 9th May with juniors and seniors taking home some bling. The all off road and somewhat technical secondary school event was won outright by Sarns Gwion Payne and the first girl home was our very own Alaw Jones. The 10k adults race was just as well attended by the dreaded midges but they seemed to impact little on the Sarn Helen performances. We placed 1st, 2nd, 3rd and 4rd overall with Felipe Jones 40:37, Dylan Lewis 40:51, Gareth Payne 42:51 and Andrew Poole 45:05. Aled Sion Jones placed 7th overall in 47:46 with Dee Jolly next to cross the line in 48:02, 1st lady. Eilir Evans made his Sarn Helen debut in a strong time of 49:36 while Tony Hall placed 1st M60 in 53:55 and Mick Taylor 1st M50 in 55:30.

A similar picture presented itself at another low key, off road affair with the same two runners placing on top at the 28th annual Dinas Head 4.5mile multi-terrain race. No stranger to the course or the wins at this location it was announced as Felipe Jones went to collect his first place prize that he, along with his older brother, had both competed at the inaugural Dinas Head race as well as many more during the years. This years’ time of 31:16 was not enough to match his coarse record but put him close to 2mins in front of the 2nd place runner. Sarns Glyn Price placed 3rd overall and 1st M50 in 33:34 with Tomos Morgans placing 1st youth with a massive PB of 35:00. Race leg heavy Simon Hall placed 2nd Open male in 35:29 with Mark Rivers pushing at his heels in 35:36.

A record time for the newer route was set by Dee Jolly as she won the ladies race in 36:25. Mike Davies ran 37:21 with Tony Hall running 41:08, placing 1st M60 and Mitchell Readwin finishing in 42:25. Eleri Rivers placed 3rd lady in a time of 23:07 While Lyn Rees made a great return from injury forced early retirement to finish in 55:15.

Friday 1st June, a beautiful evening with clear skies and a slight breeze, was a perfect night for over 200 runners to take part in the growingly popular and exceptionally challenging 3 Parks 10k Race held at Llandeilo. The event starts and finishes at the rugby club but incorporates the three stunning parks the town has to offer as well and some almighty hills to climb. Once again Sarn Helen Running club proved to provide strong competition with some great results.
Kenneth Caulkett placed 5th overall in 39:22, Daniel Hooper ran 40:18, 2nd M40, Mark Rivers finished in 42:55, Nigel Davies in 45:37, Eleri Rivers placed 9th lady overall in 48:56, Mitchell Readwin 51:00, Donna Davies 1:00:07, Liz Pugh 1:01:47 and Jenny Caulkett 1:14:47.

Very much a family-based event which successfully promotes athletics and activities amongst all ages it was nice to see the Sarn Helen family strongly represented in the 2km junior and fun run event. Ben Davies placed 3rd overall in 9:15 while Harri Rivers came 6th in 9:43. Trystan Evans ran a time of 10:36 with Ryan Davies next to finish in 10:42. The battles continue between Christopher Readwin and Steffan Rivers who ran times of 10:51 and 11:08 respectively. Owen Davies finished in a time of 12 minutes dead.

A single Sarn Helen lady made a big impact amongst a large crowd of runners at the Garwnant Epic Trail 10k on June 3rd. The technical and scenic route covers the forest trails of Garwnant, sitting at the south of the Brecon Beacons. Jane Holmes finished the event, organised by Tough Runner UK, in 1:17:56.

Another PB scored by another Sarn Helen lady, on her own but placing way up there as second lady, went to Caryl Wyn Davies at the last of the Rhayader 5k race series on June 6th. Evolved around the Caban Coch Reservoir, the event is successfully organised by Rhayader Running club and supported by the Elan Valley Hotel. A particularly strong performance saw Davies run a PB time of 19:57 placing 18th overall in a field of nearly 100.
One of our young runners, Tomos Morgans, had a busy week following the Welsh Castles relay taking part in Carwyn Phillips’ (organiser and founder of the acclaimed race Tri, The Beast, Beast Bach and Ultra Beast) very own series of races across the Preseli Mountains. The events consisting of all sorts of terrain from frim marshy grounds to rocky summits and over 1000ft of climbing in each one; he is known to be generous! On Tuesday 12th of June he took part in the Carn Ingli Killer, running 3.5 miles in 29:54 mins which was a downhill fight to the finish, paying off in the end and positioning him in third place. On the following Saturday on the 17th of June he ran Ras y Cerrig Las, running 7 miles in 1:00:26, positioning in 2nd place. The last of the 3 races was Ras Cwm Cerwyn which was 4.6 miles and he ran a time of 39.48. This was by far the most challenging course being as he had to fight the rain and fog whilst climbing ‘the wall of death’ to the summit of Cwm Cerwyn itself-the giant of the Preselis! After climbing the mountain and a downhill finish he finally completed the series and finished yet again in second place overall.

Saturday 16th June saw 5 Sarn Helen runners at Coed y Brenin near Dolgellau for the Trail Half Marathon Wales. Often run in sweltering heat, this year’s event was cool and damp and led to fast times. Dee Jolly showed her form, coming in 4th Open Female in a brilliant time of 1 hour 47 minutes. Tony Hall improved on his last year’s time coming 3rd M60 in 1 hour 59. Mitchell Readwin ran a creditable 2 hours 11, a PB by 3 minutes and Dawn Kenwright took the first F60 position once again in a time of 2 hours 15, again improving on last year. Newcomer to the event Pamela Carter finished in 2 hours 27, a clear indication of things to come in the future.