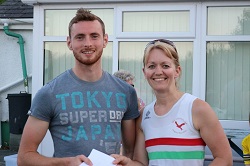 Friday 29th June was a particularly warm night for running however that did nothing to deter the competitors that came along to participate in Sarn Helen Running Clubs fifth event of the year, the Felinfach 6, which was hosted at the local primary school.

6.30pm saw the start of a series of three races for the juniors which proved, as always, to be good entertainment for the spectators in the evening sunshine. The 800 metre race was well contested with a field of 47 young aspiring athletes aged from 3 to 8 years old. William Coles, of Ysgol Rhys Prichard, was first to cross the line in 3:10 followed by Joyce Jones, of Ysgol Felinfach, who finished in 3:24 and Esme Lynock, also of Ysgol Rhys Prichard, a second later in 3:25.

In the 1500 metre Junior race, age 9 and 11, Jake Lynock of Carmarthen Harriers was first in 6:05 with Alex Coles of Ysgol Rhys Prichard second in 6:24 and Guto Miles of Ysgol Felinfach taking third place in 6:35.

The final children’s race was for the ages of 11 to 14 and covered 3000 metres. A good contest between two Sarn Helen youngsters saw Jack Caulkett take club honours in first place with a time of 11:26 closely followed by Rhys Williams of Sarn Helen in 11:31 with third place going to Cameran Miles of Aberaeron in 12:45.

Starting at 7:30pm the Seniors race covered 6 miles of undulating, hot tarmac roads and lanes passing through Talsarn and heading out to Abermeurig before returning back to the school for a fast finish in front of the expectant crowds of spectators. A group of 70 runners toed the line and it was local Sarn Helen runner Sion Price that made his move early in the race taking a lead from a chasing group in the opening mile which covered a succession of small hills. Sion was unchallenged for the rest of the race and was first to cross the line in a swift 33:01, second overall was Brecon AC runner Phil Morris in 33:32 with Michael Lai from Team Dic Aberystwyth taking third in 34:03. First lady and also first in the F45 class was Sarn Helen Founder and veteran Dawn Kenwright in 46:57 who impressed by staying ahead of a younger field, she was followed by Beth Phillips of West Coast Tri in 48:37 who was also the first in the female open class, third lady was another local Sarn Helen runner Delyth Crimes finishing in 48:53.