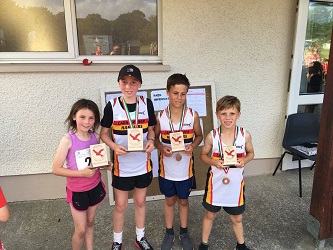 Friday evening on July 6th saw the 7th annual Cwmann 5 race held from the local ganolfan and was, as usual, well supported by both locals and club affiliated athletes. The well attended event is known for being well hosted with great support, strong spectatorship and welcome refreshments while the races, both children and adults, offer athletes of all abilities the opportunity to test their competition and endurance.

A slightly lesser field of junior runners this year is simply down to the clash of sporting events, school competitions and the heat of the evening. Although numbers in the secondary school event were low the times were encouraging and the competition, at its absolute peak between Sarn Helen team mates Jack Caulkett and Rhys Williams, was to a particularly high standard.

The results of said, 1500m event were as follows:

Competition in the 800m, 8 years and over, race was dominated by Carmarthen Harriers with one family name proving unbeatable on the night as a brother and sister team won both the girls and the boys race. A good field of 24 runners and a vast age (and size) range led to many inexpensive bursts and strong finishes throughout the race with the closest call of all seeing Esme Lynock (Carms Harriers) and Elin Onwy (Sarn) finishing just a second apart and securing 1st and 2nd girl. Third place went to Non Crimes of Sarn Helen.

In the boys race, Jake Lynock held a slightly larger lead and won in a time of 3:42 with 2nd and 3rd again resulting in a family of podium places and a Carmarthen Harriers clean sweep; Alex Coles 3rd and Williams Coles 2nd.

In previous years the low key Sarn Helen race has bought some big names to the small village lanes of Cwmann and Cellan, with Common Wealth competitors (recent and legendary) Caryl Jones of Swansea Harriers (2017) and Angharad Mair of Les Croupiers (2015) both speeding round the course and winning the ladies race. Unfortunately, this year we witnessed less of the glamour and stardom but the runners efforts were unquestionable and the mighty half mile climb to finish remained as challenging non the less. Over the adults 5mile road race great results were achieved despite the heat of the evening and the categories were placed as follows:

Finishing as 2nd lady overall but winning the F35 class in 38:27 was Eleri Rivers of SH. Pamela Carter ran 42:53 so very closely followed by Heather Hughes in 43:06 to place 2nd and 3rd, both of Sarn Helen.

No surprise presented itself in the M50 class as Sarns Glyn Price claimed victory in 31:09. An avid supported of Sarn Helen events it was the red vest of Llanelli AC that placed 2nd as Peter Osborne ran 32:49. David Thomas (Sarn) completed the veteran podium in 37:28.

The Female 45 class was won by Delyth Crimes of Sarn Helen as she ran a spectacularly strong race, finishing ahead of many of her juniors in 41:07, with her sister and team mate, Enfys Needham-Jones, placing 2nd in 43:15 and an overjoyed Nannette John (unaffiliated) placing 3rd in 46:25.

Thanks, and appreciation must be given to all that helped/ organised and volunteered, both on the day and during the preparation stages; you know who you are and with out you the event wouldn’t have been possible.

To complete the list of outstanding performance by team Sarn Helen-