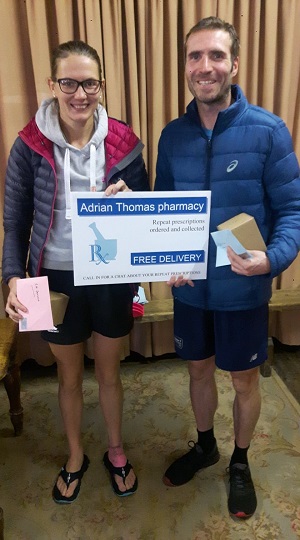 Sunday September 16th dawned with torrential downpours, low laying mist and a line-up of nearly 100 runners ready to take on the climbs and trails of Pumsaint Trail half marathon and fun runs. Conditions as they were bode well for the runners but for the marshals and organisers, some of whom were out in the elements for near to 3 hours, it was pure cheer and commitment that kept them going.

31 walkers and runners took part in the six and a half mile event which climbed tremendously for the first 3 miles; a challenge for all that took part. First to finish, in his first race back since injury earlier in the season, was Sarn Helens Jack Cockburn in 48:42. Finishing 2nd overall and first lady was Pembs Harries Tash Sexton in 49:54, a fantastic run to finish a near 70 mile running week and superb preparation for the upcoming Snowdon Marathon.

In the beastly half marathon; undoubtedly one of the toughest off road races around, it was Cardigan RC’s Mark Horsman who crossed the finish line first in a strong time of 1:28:20- A staggering 10 minutes faster than his race last year, winning the race overall and placing 1st M40. An overjoyed Michael Davies of Sarn Helen placed 2nd M40 in 1:39:09 while his team mate Dan Hooper was close behind and placed 3rd in 1:39:58.
Bringing a touch of celebrity to the event and winning the ladies race by a staggering 10 minuets it was a pleasure to welcome GB Commonwealth marathon runner Caryl Jones, previously of Carmarthen based club TROTs but now affiliated to Swansea Harriers. Her time of 1:33:40 really showed the men her heels as she also placed 2nd overall and won the Open Female class while runner up in the same class was Sarn local Dee Jolly who PB’d in a time of 1:45:40.

2nd male to finish and winning the Open Male class in 1:34:39 was trail and distance lover Lee Shannon from Pembs Harriers. Simon Hall of Sarn Helen claimed silver in 1:36:15 while Alex Lewis of Neath Harriers clinched 3rd in 1:41:07.

TROTs runner Kevin Griffiths dominated the M50 class as he finished in 1:35:20 with Sarn vest Glyn Price hunting him down and placing 2nd M50 in 1:36:15. Ensuring that every Pembs Yellow vest present went home with a prize Alec Williams placed 3rd M50 in 1:42:32.

With two of his closest rivals off the running circuit, TROTS Mark Terry and Sarn’s Murray Kisbee, Tony Hall of SH may have been the only Vet 60 to contend but his impressive time of 1:57:28 placed him in front of half the total pack.

As always the tough trails brings a strong contingency of veteran female runners and winner of the F35 class in a massive 2 minute best time was Wendy Price of Carmarthen Harriers. Runner up was Sarn Helens Eleri Rivers who ran 1:56:37 with Prices team mate Kate Lynock completing the F35 podium in 2:14:58.

Placing ahead of the total F45 top trio was Sarn Helen legend Dawn Kenwright who won the F55 class in 2:03:43. Placing second in 2:36:03 was unaffiliated runner Nanette John.

Spectators spent their morning in awe of the 45 junior competitors who all ran well and embraced the terrible weather. The one-mile race is flat but knobbly underfoot; the winning time of 6:06 from Jake Lynock of Carmarthen Harriers was highly applauded and he was presented with first prize in the secondary school race. 2nd went to Harri Rivers of Sarn Helen who ran 6:52 and Rhodri Gregson placed 3rd in 7:30. Lynocks younger sister and CH teammate Esme can also boast a first overall in the girls races and won 1st Primary school in a time of 7:04. Eva Davies won 2nd and Elin Evans, Sarn Helen placed 3rd in 8:59. Secondary school girls was won by SH’s Gwenllian Jones in 7:11 with Jessica Jones 2nd in 7:31. A strong primary school boys group resulted on only 24 seconds between the top 3. Ryan Jones 1st in 7:19, Tudur Jones 2nd in 7:20 and Llew Gregson 3rd in 7:33.

Race organiser Carwyn Davies would like to thank everyone who supported the event, wither by competing, marshalling or during preparation. Many thanks to W D Lewis, Lampeter for sponsoring the childrens races and much gratitude to Adrian Thomas Pharmacy, High St, Lampeter for sponsoring the main event. A fantastic total of £3500 was raised to be split between Noah’s Ark Children’s Hospital charity and Kids Cancer Charity.