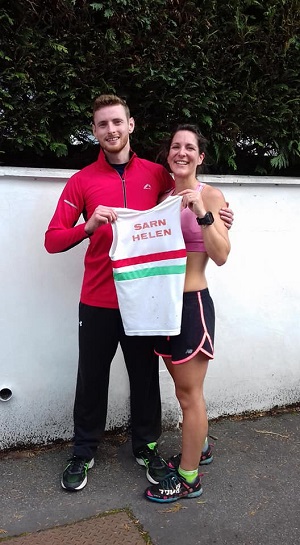 As storm Callum wreaked havoc on most of Ceredigion through Fri and Sat Oct 12th and 13th in other areas of Briton things appeared to chug along like normal, with Sarn Helen making appearance throughout the weekend in Pontypool, York and in surprisingly warm sunshine in Aberystwyth. The Caulkett family travelled south to the outer edges of the Brecon Beacons national park where father, Ken Caulkett, gave a spectacular performance on his return from injury.

Held on Saturday 13th, the ironically named Pont-Plod multi-terrain 11mile race is a classical new trail run through the gorgeous countryside around Llandegfedd Reservoir, which at one point bears witness to runners ‘plodding’ for nearly a mile UP a stream bed. Caulkett placed a brilliant 2nd overall in 1:15:32; nearly a 3minute lead on the runner in third.

As two-time previous race winner at Aberystwyths Twin Peaks race (2016, 2017), held this year on Sunday 14th Oct, Caulkett was glad to hand the mantle over to Sarn Helen team-mate, the up and coming Sion Price. Price leapt off the start line, made a staggering lead for 1st place, and kept it to claim overall victory. Conditions along the multi-terrain course were exceptional considering the gales and rain fall experience just the day before making the route enjoyable and the appearance to strong sunshine bought a welcome group of spectators. Sarn Helen Running Club was well represented with 13 competitors on route with some fantastic results.

The juniors event is appropriately named the Consti challenge which directs children on a mile loop, incorporating some of the might that is the mighty Constitution Hill. Two families made the start line of 78 brave trainered children. Tudur Llwyd placed 4th Primary boy in 7:58, Maddie Eadon placed 2nd Primary girl in 10:13 and Gwenllian Llwyd ran a time of 16:02 on the longer route, placing 3rd secondary girl.

Distance lover and the fastly becoming Sarn Helens very own marathon man, Nigel Davies, travelled to York for the weekend on a mission to conquer the massively coveted sub 3-hour marathon. On the Saturday conditions looked promising but as race day dawned the wind picked up and the rain began to fall. Not to be deterred Davies went through half way in 1 hour 28, leaving a little wiggle room to achieve his goal.

The York Marathon is one of the largest events of its kind in the north of England and the route, which incorporates views throughout the medieval city, the bells of York Minster, and even a Vicars blessing in one of the traditional outlaying villages, drew a crown of over 4000 runners. Fighting hard through the second half Davies’ pace dropped off during the second half and as fatigue set in his vision of the clock on the finish line unfortunately had to be re-evaluated. Davies crossed the line, after 26.2 miles, in a time of 3:06:24 which placed him a superb 198th overall. An outcome that did not fully reflect Davies dedication or training he was pleased nether-the-less to have finished strong and at a pace of 7 mins 7 secs per mile!

An exciting new event was held on Saturday afternoon, October 20th, at the hall in Dihewyd and organised by Dihewyd School PTA. The children’s races and food stalls were a massive success with some exceptional results from both club athletes and local children, where all who competed enjoyed and all who enjoyed got a medal. The one mile fun run was a challenging route and offered children the opportunity to stride out on the fastly sloping roads and to test their strength on the rockier pulls up. Sarn juniors, as always, made their mentors proud with some great performances;

Sunday 21st Oct was an extraordinarily busy day of racing, running and competing for Sarn Helen Running Club as they were represented at many events across several counties. Sion Price gave another outstanding performance in the well-attended Ron Skilton Half Marathon, LLanwrted Wells, adding another outright win to his growing race portfolio. A multi-terrain race, which incorporates nearly 3,000 feet of climbing, is tough by anyone’s standards and boasts some astonishing views. Price and his revered team mate Felipe Jones used each other to push an astonishing pace up until the final 200m stretch but it was the younger of the two pairs of legs that took the outright title as Price finished in 1:27:40; Jones won the M40 class with his 2nd place time of 1:27:45.

The leading Sarn men were not the only club members to clinch a trophy over the challenging climbs of the famous Man V Horse territory as Simon Hall finished 4th overall and placed 2nd open male in 1:35:50 after boasting a good outcome from a battle similar to that of the winning two. His opponent (and not for the first time), Dan Hooper, placed 3rd M50, crossing the finishing line in 5th place and just 2 seconds behind Hall. The next Sarn competitor to finish in a significant 8-minute coarse record time and a 9 minute course PB of 1:42:22 was Dee Jolly who placed first lady (with a 9 minute lead) and 15th overall. Tony Hall placed 1st M60 in 1:54:27 making a strong return, on a particularly hard route, from a calf injury while Mick Taylor narrowly missed out on a podium spot as he placed 4th M50 in 2:02:48.

On the same sunny Sunday and adding to the Sarn Helen glory was a family of first place runners at Ras Hwyl 5k at Rheidol Hydro Power Station. Mother and Son team, Donna and Ben Davies, placed 1st male and first female overall in the 5k event which was organised by Ysgol Penllwyn and well attended by both adults and children, fun-runners and walkers.

Further from home and running roads that he is both comfortable on and familiar with our Pumpsaint Half Marathon organiser took part in Stroud Half Marathon for the umpteenth time. Not a PB but showing true form Carwyn Davies placed a fantastic 17th in his class, 77th overall in a field of over 1700, in 1:26:16. The following weekend, Sunday 28th,the Davies family took another trip across the English boarder, this time to Worchester, for the lady of the family to darn her race shoes. Taking part in a low key and slightly unusual half marathon, well organised amongst a list of other events of varied distances, from the race directors own living room(!) Emma Davies covered the 13.1 miles in a personal best time and finished 3rd in her event.