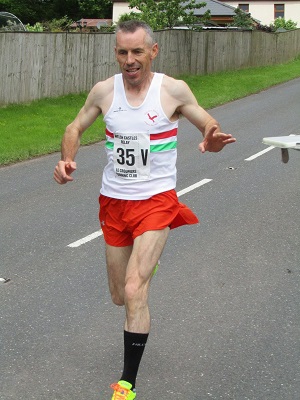 October 27th marked the 36th running of the Snowdonia Marathon, limited to 3000 places the event sold out within hours of opening for entries in December last year such is the popularity of this event, which sees runners from across the UK and beyond return time and again to test themselves on a road marathon that has the reputation of being the toughest in the UK.

The picturesque route which starts and finishes in Llanberis takes runners on roads and tracks that encircle Snowdon and features a total elevation gain of over 2700 feet adding considerable difficulty to runners that aim to cover the distance. Always a popular event among Sarn Helen runners a group of 11 gathered in sunny but cold conditions at the start just outside Llanberis, first home for the club in a staggering time of 3:10:47 and in 46th overall was Michael Davies securing a silver medal in the welsh masters M45 championship, Glyn Price followed in 3:21:47 99th overall which was also rewarded with a silver medal in his M50 category of the welsh masters championship, Nigel Davies finished in 3:34:01 177th overall, Steven Holmes cruised around in 3:54:08 438th overall, an experienced Eric Rees who was completing an unbelievable run of 25 Snowdonia marathons crossed the line in 4:09:35 674th overall, Mitchell Readwin was pleased to finish in 4:12:32 and 735th overall getting ever closer to his sub 4 hour target. First home for Sarn Helen ladies was Delyth Crimes in a strong time of 4:25:31 placing 979th overall, next to finish for the club was Helen Willoughby in 4:57:15 1530th overall, Joana Rosiak taking a last minute place from a club member that was unable to run was pleased to finish in 5:03:05 1604th overall, Nanette John smashed her first marathon and finished in 5:07:33 as did Liz Pugh who was also running her first. Putting in a gritty and emotional performance to finish in 5:12:47 1721st overall, followed by the ever consistent Jane Holmes in 5:30:26 1900th overall.