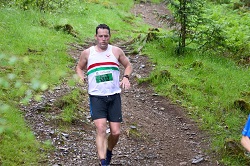 A team of three men represented Sarn Helen with some brilliant results in the annual Tata Steel Richard Burton 10k on Sunday 4th October in Port Talbot. The relatively flat 10k boasts being one of the oldest events of its kind in wales and drew a large crowd of over 1500 runners. First to finish in the Sarn vest was a man going from strength to strength; Sion Price covered the 6.2 miles in a time of 34:34 and in a brilliant 12th place overall. A man who has completed of 50 marathons, David Thomas, ran a time of 51:29 and one of our top-notch Veterans, Graham Penn, ran a time of 1:04:12.

The following Saturday Oct 11th, said veteran Penn travelled to Bexhill on sea in east Sussex to take part in the Poppy Half Marathon. As if covering 13.1 miles with just your own two legs wasn’t enough Graham (Inky) Penn ran in full World War One uniform, including cap and boots, and finished in an official time of 3:01:17.

Two fierce friends and fiery Sarn Helen Ladies, Emma Gray and Helen Willoughby, travelled to Dorset on Saturday 10th November to test themselves against the trails and darkness of White Star Runnings night half marathon. The event was hosted by the amazing Moors Valley Country Park, covering both open and woodland trails which had to navigated in total darkness with only headtorches and intuition for guidance. Both women were overjoyed to finish in massive event best times with Willoughby placing 5th F50 in a time of 2:07:18, meanwhile Gray crossed the line in 3:13:10.

Daniel Hooper claimed overall victory at Llyn Y Fan fell race on Saturday 17th November after a closely fought battle against both his second-place opponent and some devastatingly strong winds. The horse shoe race is a classic fell event with only a few marshals, even fewer markers and a monster of a mountain in the middle. Hooper won the race by just 12 seconds with a finishing time of 54:37 and claimed his first-place prize of a giant marrow! Calvin Williams was also present to challenge the beastly climbs and some staggering wind resistance. He covered the 5.5 mile distance in 1:07:06 and placed 2nd M50.

Tough Runner UK is fast becoming a big and successful name in the welsh trail running community as each year they launch new events on previously unraced territory. Our cancer surviving heroin Jane Holmes was the only Sarn Helen runner present at the Winter 10 Mile Wales event organised by the Tough Running team in Afan Forest Park, Neath, on Saturday 10th Oct and she completed the hilly trail course in 2:18:57, placing 11th in her category.

Conducting a brand new event on a location much closer to home the Tough Runner UK crew drew over 500 runners to the trails and fire roads of Brechfa forest, Byrgwym, Carms as they held a trio of challenging trail races on Sunday November 18th. The largest crowd was drawn to the half marathon distance which included near 2000ft of climbing and was won overall by Samuel Gregory of Aberdare in 1:28:30 and Lowri Morgan of S4C in 1:42:01. Kevin Hughes of SH was next to cross the finish line after the famous welsh sports woman and placed an impressive 12th overall and 2nd M40 in 1:44:07. Pamela Carter is always looking to challenge herself and for the next trail to climb; she placed 10th F35 in 2:32:37.

We had two representatives in the 10k out and back race with Lyn Rees winning the M65 class and once again the idol that is Jane Holmes, smiling the whole time, raced to place a comfortable 9th in her class. Rees ran a time of 1:18:55 and Holmes finished in 1:22:59.

Sunday 18th of November was also the day of another iconic event, this time a half marathon held in the beautiful seaside town of Conwy. Two of Sarn Helens members made their way up to Conwy to take part in the 10th anniversary of this great event. Both Martin Darby and George Eadon needed this event to complete their 3 castles series 2018 which incorporates 3 half marathons in North Wales, starting with the Snowdonia back in May, Bangor in October and finishing off with Conwy.

It was a beautiful crisp morning in Conwy as we stood on the side of the quay in the shadow cast by the iconic castle. The route takes you from the castle, over the bridge towards Llandudno and another iconic landmark, the Great Orme. For those that have travelled the Orme, you will know that it’s not flat and very exposed. Fortunately, the brisk easterly wind was behind the runners as they climbed the Orme to the half way mark before descending back down the other side.

Some 4000 runners took part and the first to cross the line was Gwyn Owen (unattached) in a time of 1:15:28. Not too far behind was George Eadon, flying the flag for Sarn Helen, completing the scenic course in 1:30:41 (142nd overall) and Martin Darby in a very respectable 2:02:17 (1662nd overall), Martin having done very little training.