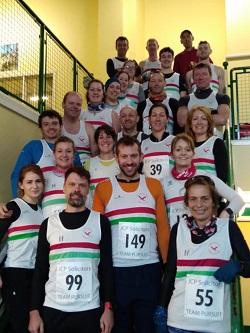 Sarn Helen Running Club kicked off 2019 with a superb presence at the highly competitive 2019 Team Pursuits event held in Crymych on Jan 27th. A highlight of the south wales race calendar the one of a kind event is successfully organised by the onlineraceresults.co.uk team and composes of 60 teams, 5 runners to a team, all covering a 6.5 mile VERY hilly course. Results are simple; individual runners times are cumulated and the fastest team wins.

Winning their class for the second year running and by a fair margin was our Vet Male team; Carwyn Davies, Mike Davies, Glyn Price, Nigel Davies and Mark Rivers. Never to be outshone our Vet ladies also won gold with current Sarn Captain, Sian Roberts-Jones, making a great racing comeback, Eleri Rivers, Carol Rees, Delyth Crimes and Pamela Carter completed the speedy team. With only 5 possible category wins available on the day it was a massive achievement for such a small, intermit club to bag 3 of them as our Mixed team (needing to compose of 2 females) also won their class. Running in this team were Mick Talbot Taylor, Steffan Thomas, Dafydd Lloyd, Dee Jolly and Nia Venville.

Keen for a weekend away in the famous English Capital Joanna Rosiak decided that the only way to make it complete was to run a massive charity 10k race whilst she was there. The 2019 Cancer Research UK London Winter Run was held on February 3rd where the 10k route started in Trafalgar Square and runs through the heart of the city. Rosiak ran well and as usual, with a massive smile. She finished in 51:41.

Sunday 10th February saw a record number of more than 2200 runners gather at the Parc y Scarlets rugby stadium in Llanelli for the half marathon which continues to grow in popularity. Organisers had changed the route slightly to offer better running conditions and the largely flat and fast course offered good potential for some fast times, taking runners down the coastal link road and on to the scenic millennium coast path before returning back to Parc y Scarlets for an atmospheric finish in front of hundreds of supporters.

The tail end of storm Eric created challenging conditions on the day with a strong headwind to contend with in the first 5 miles, retaining his title from last year Matthew Clowes of Cardiff AC clocked the winning time off 66:44 nearly two minutes slower than his winning time of 2018 clearly hampered by the strong winds. A similar repeat performance in the ladies race it was Swansea Harriers athlete Caryl Jones that reclaimed her 2018 title in a time of 77:05, again some 2 and a half minutes slower than her 2018 time. Also battling in the winds were eight representatives of Sarn Helen and first home for the club in a time of 84:27 was Ken Caulkett placing 50th overall, further back in 88:52 was Nigel Davies in 102nd, first home for Sarn Helen ladies was Nicola Williams in a solid 1:52:15 698th, followed closely by Elisha Jones in 2:14:07, her fist race representing the club. Enfys Needham-Jones broke the coveted two hour mark with 1:59:23 990th, in another club debut Owen Mcconochie ran 2:01:08 to finish 1088th, whilst Rebecca Doswell finished in 2:11:51 1430th and Emma Gray ran 2:33:33 finishing 1928th.